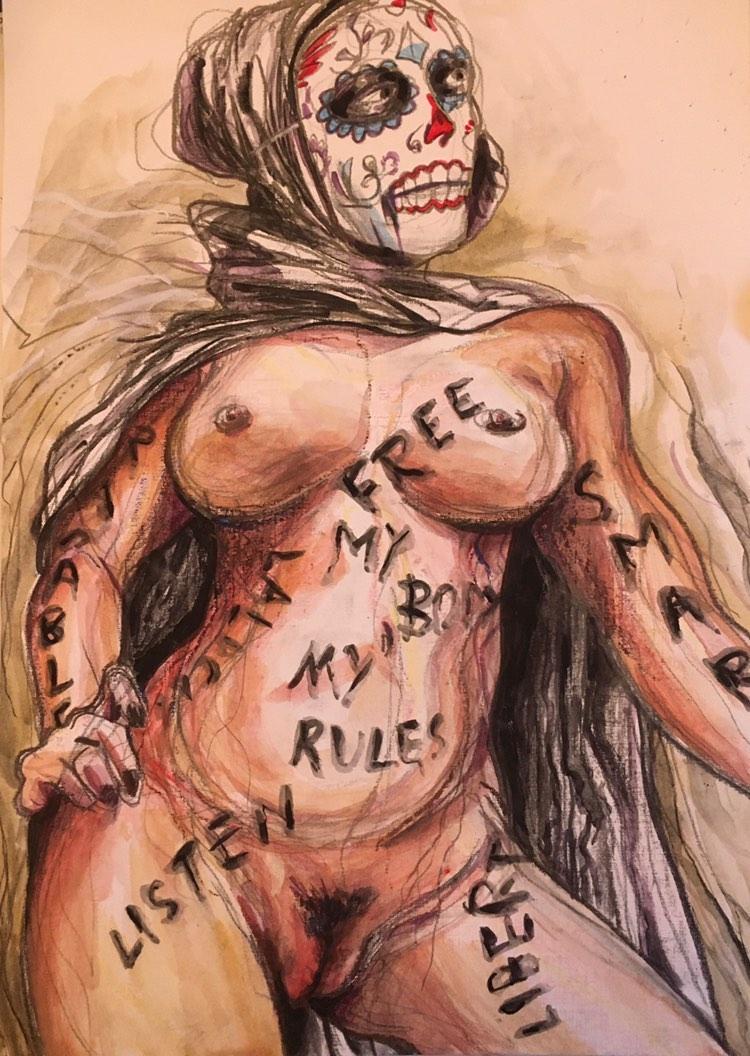 In this path of playing Amatha, I have tried many social networks trying to gain more exposure on the art I try to create, but I have had many problems by community guidelines, algorythms, haters and people who simply get offended for nonsense because of what I try to do, so yes, amathalovers, I have had a hard time on social media to promote my art.

Will I quit? NEVER, ar shouldn’t be censored, nudity is art, the human body is art, we are art. each one of us,. so will continue to promote my art, one way or another.

So, here is my tough, hahaha, story on social media.

First Instagram, blocked my first account, they used to block pics even that these ones were close ups of my masks, where is the bad on that? and also I think that there was someone reporting my work, since when I posted things, IG didn’t blocked me, was later that this happened, so I had a hater or a horny guy that wasn’t happy because I didn’t help him jerk off, so that account was blocked, don’t know for how long, and now I have two accounts, one public @amathaboudoirs and one private @amathamaskedmodel where things are difficult, the account is growing slow but steady, so hard work is paying, someway, since still have some problems with some pics, stories, that are removed due to problems with their community guidelines.

Twitter was next, Twitter allows nudity except on your profile pic, what happened? Yes, I had a provocative twitter pic, so they told me, I change, removed again, I change and even made some changes I got sick of playing with stupid rules, so my account is blocked there. Also I think in twitter is difficult to grow on fans, think IG, even censoring things and with their bullshit, makes a difference, still many things to improve.

Next was Youtube, here my stay was pretty short, I used to post short clips of me dancing, nothing of extreme nudity, small glimpses, but they told me was innapropiate for youtube and blocked my account, really my shot here was pretty short, so not much to tell.

Patreon now, here they warned me because they said that my pics were sexual offerings, not art, but felt like they were telling me I was selling sexual services, feel insulted, send them away. They told this pic was for sexual services, really? what do you think?

So, right now, my only official channels for me to show my art, are here, on my website and in the 2 accounts I mentioned on Instagram, @amathaboudoirs and @amathamaskedmodel. So come, follow me, support my work, since I do this to create art and amaze you with what I can do, so take a look around, visit my shop and enjoy this masked world of mine.

Hello there amathalovers, how you been? Well, I been making changes, again, as you can see, so lets bring on this new stage of Amatha, yeiiii.

Also, lets continue with my stories, this is of one boudoir I shoot where I was using an extremely tiny bikini or lingerie, honestly I don’t know how to call it, so I just call it a v-kini, because it is just a piece of cloth in shape of a V where it barely covers what needs to be covered, so it is pretty hot and sexy. A good way to surprise your couple.

Don’t you think it looks small?

Think that using that and being naked can be the same, hahaha, just one move and it will bump out, but as said, think it is a pretty cool lingerie to play with your couple or just for you to feel really sexy with yourself.

This boudoir was shot on holidays, at the hotel room, yes even in holidays I work even when I need rest, so I generally take my Amatha things when I travel, in case we have an idea and we want to create something in the moment, so many times I carry my Amatha emergency kit as a boudoir emergency if needed, hahaha

Don’t think I have too much to say about this boudoir, well on these holidays, I shoot 6 different boudoirs, some indoors and some outdoors, think I made a good use of my time by creating this beautiful pics.

Now you can check what I have done in this masked world of mine, through the shop, there is everything I have done for you to see, both my boudoirs and artistic nudes are there for you to enjoy in all its uncensorness hahaha

The advantage of posting here is no one can restrict me, #”!%& Instagram, Patreon, Twitter and YouTube for making my artistic life that complicated for following your totally inconsistent community guidelines.

And this work, has helped me to get that my art, my boudoir pics are getting recognized as what I am trying to do, a piece of art, something artistic, a way of expressing myself, not just a nude girl, but a bit more and I feel so good about that, I really appreciate the persons I have worked with.

So, my creative process will continue, more will come, things will change again, need to advance to create, so stay tuned since more will come to this masked world of mine.}

During my last long vacactions I did several boudoirs, being one of them “The Hot Maid Boudoir” hahaha, was really cool amathalovers!!

This boudoir has a simple and sexy idea, play a maid, just with a really specific outfit, a beautiful corset and nothing more, zero undies, just nothing down there.

So, the pics were taken on a hallway of the hotel we where, grab a basket that was at the room and just walk around the hall pretending to do a maids job, but with no undies.

Felt sexy, great and I think that even I am wearing nothing below, still you can’t see there, hahaha making that scence of mystery, of feeling that you know it is there, but at the end it is not there, so close but so far, ahaha, love to create that feeling.

Also to be done in black and white gave the pic a more deeper and beautiful touch than if we have left them on colour. Really think black and white gives pics an special essence, a different touch and really love it.

So, I will continue playing in my masked world, creating new pics, both colour and black and white, will continue to create more, maybe will change again things a bit, but one thing is for sure, I do this to express myself, enjoy myself, have learned a lot of me while doing this, so I will just continue creating art.

If you follow me on Instagram amathalovers, you may have seen that a lot of my last boudoirs I have done them with no undies, even with nothing at all, jus creating art, always keeping the artistic touch.

Anyway, I just do my art, my way, I just want to let it flow, be natural, express myself, love myself, that is what any person should feel with yourself, without caring what others may think, jus enjoy your beauty.

That is what boudoirs are about, enjoying ones sexuality, enjoying who we are, our intimate space, where we can be ourselves. for me no matter where it is, I am just me, just act natural and enjoy my moment.

Why doing it this without undies? Well, for me it is just acting natural, I am not thinking that I have no undies, I am just doing what I have to do, it is doing the same like being clothed but here one is naked, that is all, plain and simple.

So when I do this basically I don’t think on what I show and what I don’t show, I just let myself flow during the session and simply enjoy it, just enjoy who you are, that is my main recommendation to all boudoir models or persons that want to experience a boudoir, enjoy yourself.

Of course a good relationship needs to exist with your photographer, both need to be comfortable with one another and also my recommendation, never force things, the more natural, the better.

So, hope you enjoy this world of mine, follow me on Instagram where I post most of my work, if you want to see more, just DM or contact me for information on how you can get my full set of pics and mainly enjoy my Masked World.